Welcome to our sixteenth online suggested practise for the week. We are now broadcasting a live teaching each Monday evening. If you would like to participate please contact us using the contact form on the homepage.

Francis Younghusband, Commissioner for Tibet during the 1903 British invasion of Tibet, viewed the country as backwards, its people largely lazy and their domination by Buddhist Lamas as corrupt. Yet, years later he was to became a spiritualist and these days regarded as a “premature hippie”

The religion of the future will be a cosmic religion. It should transcend personal God and avoid Dogma and theology. Covering both the natural and the spiritual, it should be based on a religious sense arising from the experience of all things natural and spiritual as a meaningful unity. Buddhism answers this description…. If there is any religion that could cope with modern scientific needs it would be Buddhism.
~ Albert Einstein

The coming of Buddhism to the West may well prove to be the most important event of the Twentieth Century.
~ Arnold Toynbee, Historian

I had spent the summer of 1969 working in a Manhattan law firm. Listening to the young Fifth Avenue lawyers complain had convinced me that I was not cut out to be the Gray Flannel fifties men, vying for a better birth on the Titanic. I knew I wanted to learn more, not earn more.
~ Lama Surya Das (formerly Jeffrey Miller)

The Buddhist’s purpose in life is to raise the quality of living as distinct from the standard of living, to eliminate the self which hides the light of his own Enlightenment rather than to improve the comfort of his worldly life. His proudest creation is therefore his own character, and if the average Buddhist is far from a perfect exemplar of his Master’s Teaching, history has shown that the fruits of Buddhism have been not only great art and culture, but, what is greater still, great [people].

What messages does Buddhism give about how we can be content or ‘happy’?
The Buddha said again and again, ‘All I am trying to teach you is how to attain enlightenment.’ And nothing else. He’s also supposed to have said, while holding a handful of leaves, ‘What I’ve told you is like this handful of leaves. What I know is like the leaves in the forest. But you don’t need it.’ There are certain topics, like ‘How did the world begin?’, where he says ‘Don’t bother, you’ll never find the answer and it wouldn’t help you if you did.’ That makes Buddhism very unlike other religion: explicitly anti-dogmatic. He said ‘as long as you can find the way to attain enlightenment, follow it. Don’t bother with anything else. Don’t take anything on trust. Try it out.’
There’s a story that some villagers from Kalama come to the Buddha and say: ‘We’re very puzzled, because all sorts of teachers come to us and one says this and the other says that and we don’t know who to believe.’ The Buddha says ‘Try out what they say and if it works – that’s the one you believe.’
Now what is the purpose of the Buddhist religion? It is, in the end, escape from rebirth. Everybody in India believed – and more or less still believes – in rebirth. And of course a basic premise of that is that, if you weigh it up in all, life is pretty rotten. There’s more suffering than pleasure in life. And the Buddha says that the kernel of his doctrine is the Four Noble Truths:
1. ‘there is suffering’
2. ‘there is an origin to suffering’
3. ‘removal’
4. ‘the path’
Suffering is then expanded a little bit in the first sermon when he asks ‘What is suffering, mainly?’ and the answer is ‘death’. Every relationship ends in death (you have to remember that in those days life expectancy would have been much lower). You lose your parents, you may lose your children, your wife or husband. Like all religions, in a way it ends up saying, ‘What are we going to do about death? Can we escape the tragedy of death?’ And the Buddha’s response to this is, ‘What is the origin of suffering? The origin of suffering is wanting, craving things.’ The solution is called ‘Nirvana’ (there are other names for it too). Nirvana is the abolition of passion (which means wanting something very much), and the opposite – hatred – and confusion. And, if you can completely get rid of those, you no longer want anything, so you become – not ‘happy’ as we would call it today, but something closer to attaining complete ‘peace of mind’ – it’s calmness, tranquillity, imperturbability if you like. And nothing will upset you anymore. In particular you will not be at all upset by the prospect of your imminent physical death.
That doesn’t mean to say that you don’t notice or feel things: if somebody’s ill, you’re sorry. If they die, you’re sorrier, but not in a way that really gets to your core. You can control your feelings. It’s rather like (and the Buddha is often compared to) a doctor or psychiatrist, who understands the patient’s sufferings and tries to remedy them. They can sympathise with them but are still able at the end of the day to go home and have dinner with their spouse and forget about all that, or at least not let it upset them or affect their attention towards other patients the next day. That’s the model.

Do you think there are problems with modern expectations of happiness?
From my own personal point of view? Of course.
The fundamental thing I learnt from how I was brought up was that money doesn’t bring happiness. Now of course that doesn’t sit very well with capitalism! We’re so unbelievably bound up in it today. Capitalism, advertising, tells us we want things – the direct opposite of the Buddha’s teaching that wanting is the origin of suffering.

”Even when someone I have helped,
Or in whom I have placed great hopes
Mistreats me very unjustly,
I will view that person as a true spiritual teacher” 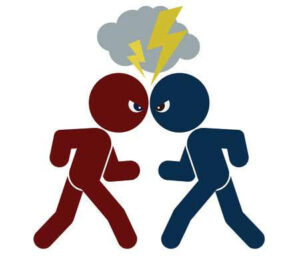 1. By thinking of all sentient beings
As more precious than a wish-fulfilling jewel
For accomplishing the highest aim,
I will always hold them dear.

2. Whenever I’m in the company of others,
I will regard myself as the lowest among all,
And from the depths of my heart
Cherish others as supreme.

3. In my every action, I will watch my mind,
And the moment destructive emotions arise,
I will confront them strongly and avert them,
Since they will hurt both me and others.

4. Whenever I see ill-natured beings,
Or those overwhelmed by heavy misdeeds or suffering,
I will cherish them as something rare,
As though I’d found a priceless treasure.

5. Whenever someone out of envy
Does me wrong by attacking or belittling me,
I will take defeat upon myself,
And give the victory to others.

6. Even when someone I have helped,
Or in whom I have placed great hopes
Mistreats me very unjustly,
I will view that person as a true spiritual teacher.

7. In brief, directly or indirectly,
I will offer help and happiness to all my mothers,
And secretly take upon myself
All their hurt and suffering.

8. I will learn to keep all these practices
Untainted by thoughts of the eight worldly concerns.
May I recognize all things as like illusions,
And, without attachment, gain freedom from bondage.