Welcome to our forty sixth online suggested practise for the week. We are now broadcasting a live teaching each Monday evening. If you would like to participate please contact us using the contact form on the homepage.

2.0) A verse written for the Chinese Tibetan New Year – Presented by Bob Pollak 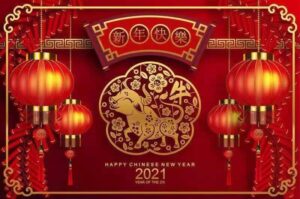 This humble offering of wishing prayers is made on the New Year of Iron Ox Year.
May you have a constant smile on your face and live long and healthy.
May there always be laughter in your speech and bring solace to countless lives.
May your heart be ever filled with loving kindness, joy and peace.
May all your wishes come true in this year without making any efforts.
~ Ringu Tulku ~

2.1) Zen in the Art of Archery –  Presented by Geoff Warren 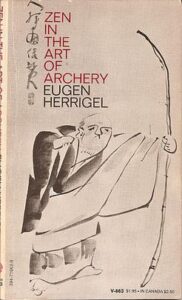 Zen in the Art of Archery (Zen in der Kunst des Bogenschießens) is a book by German philosophy professor Eugen Herrigel, published in 1948, about his experiences studying Kyūdō, a form of Japanese archery, when he lived in Japan in the 1920s. It is credited with introducing Zen to Western audiences in the late 1940s and 1950s.
Origin

Herrigel (1884–1955) was a German professor of philosophy, with a special interest in mysticism. From 1924 to 1929 he taught philosophy in Japan, and studied Kyūdō (the art of the Japanese bow) under a master named Awa Kenzô. Awa taught kyūdō in a way that was regarded by some as a mystical religion, called Daishadokyo. Daishadokyo was an approach to kyūdō that placed great emphasis on the spiritual aspect and differed from much of the mainstream practice at the time.[1] In 1936, Herrigel wrote a 20-page essay about his experiences, and then in 1948 expanded the essay into a short book. The book was translated into English in 1953 and Japanese in 1955.

The book sets forth theories about motor learning. Herrigel has an accepting spirit towards and about unconscious control of outer activity that Westerners heretofore considered to be wholly under conscious-waking control and direction. For example, a central idea in the book is how through years of practice, a physical activity becomes effortless both mentally and physically, as if our physical memory (today known as “muscle memory”) executes complex and difficult movements without conscious control from the mind.

Zen in the Art of Archery
Herrigel describes Zen in archery as follows:
“(…) The archer ceases to be conscious of himself as the one who is engaged in hitting the bull’s-eye which confronts him. This state of unconscious is realized only when, completely empty and rid of the self, he becomes one with the perfecting of his technical skill, though there is in it something of a quite different order which cannot be attained by any progressive study of the art (…)”
Influence

Herrigel’s book may have inspired Tim Gallwey’s 1974 book The Inner Game of Tennis. Both Herrigel and Gallwey approach sport and life as opportunities for learning inner cooperation. Zen in the Art of Archery also relates to the “inner child” idea in humanistic psychology. Later literature either discusses balancing the “inner game” and the “outer game” or counseling approaches to accessing, communicating and collaborating with the inner child beyond sports.
The title “Zen in the Art of Archery” most likely inspired the titles of many other works, either directly or indirectly. Foremost among these is Robert Pirsig’s 1974 book Zen and the Art of Motorcycle Maintenance. More than 200 works have been created with similar titles, including Ray Bradbury’s 1990 book Zen in the Art of Writing, as well as Zen and the Art of Poker, Zen and the Art of Knitting, Crazy Legs Conti: Zen and the Art of Competitive Eating, and so on.
J. D. Salinger’s fictional character Seymour Glass applied one aspect of Zen archery—aiming by deliberately not taking aim—to playing the children’s game of marbles.
The wider theme of many of these works is that a regular routine can have a spiritual dimension 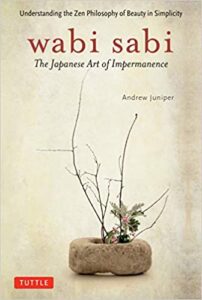 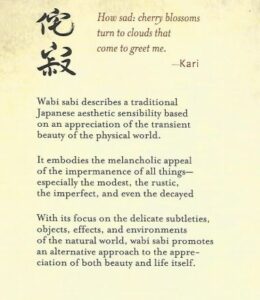 ….Buddhists say that the idea that desires can, if given sufficient means, be satiated and appeased is an obvious fallacy, and that beyond one desire lies an inexhaustible line of others, The only true way, then, to find a state of independence from the demands of the physical world is by ceasing to need more than is required. By only taking what is really needed to maintain physical health there is a freedom from the relentless desire to have anything more. The scope of this freedom is far-reaching, because it then opens the way for a simple life without hte need to chase dreams of wealth or sensual gratification. Freed from the desires, a person should be able to find peace and not need to invest so many hours of the day in pursuit of goals that yield only transient satisfaction……