Welcome to our thirteenth online suggested practise for the week. We are now broadcasting a live teaching each Monday evening. If you would like to participate please contact us using the contact form on the homepage.

2.1) Placing the Mind without Support – Excerpt from Pointing Out the Dharmakaya by Khenchen Thrangu Rinpoche

This meditation technique uses the elements and the dissolution of the elements, one into another, as a basis for the mind coming to rest. The technique involves visualizing the elements in their essential form.

When you use this technique, then eventually your mind will come to rest in a state without thought, and then you maintain that state, using an appropriate degree of force to your mindfulness and alertness. Sometimes you mindfulness will need to be quite relaxed and at other times exerted. When it is relaxed, the mindfulness needs to be just enough bare attention so that you do not become distracted, so that you do not forget. When your mind is afflicted by either the tendency toward torpor of the tendency toward excitement, then you need to increase the exertion of power of your mindfulness. You need to exert the amount of force or energy of mindfulness necessary to keep yourself from becoming distracted by either torpor or excitement. It is taught that, in fact, no thought will arise in your mind at this point until you become distracted. So, when a thought arises, you do not become involved in the content of the thought – which means neither following the thought, nor examining the thought, nor evaluating whether it is a good or bad thought, and so on – but merely recognize the arising of the thought, then the thought itself becomes the next object of your attention in this technique. In that way, you practice the technique that is called resting the mind on emptiness 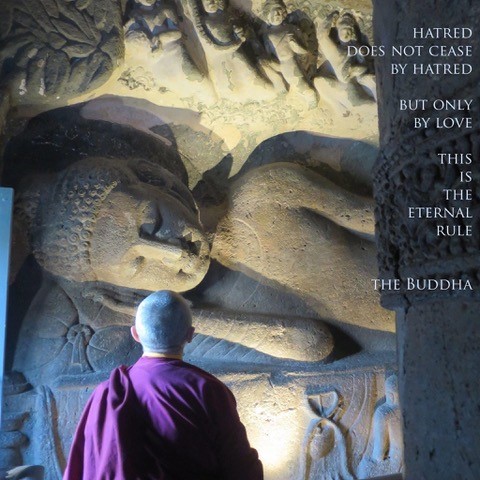