Welcome to our forty second online suggested practise for the week. We are now broadcasting a live teaching each Monday evening. If you would like to participate please contact us using the contact form on the homepage.

2.0) Finding Ourselves  – Presented by Bob Pollak 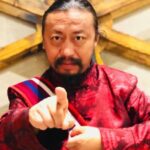 A Glaswegian wit scorned people heading to some supposedly mystical location ‘to find themselves:’: “Och, those lunkheads fast remember who they are when it’s time to fetch their pay packets!”

Today happens to be our Sangha friend Rai Clewes’ birthday, as well as my own. From the Buddhadharma perspective, one might ask: who are these two people born all those years-ago on this day, who purport to be Rai and Bob?

What follows is not a detailed or definitive explanation of no-self; rather, it is an attempt to gain some understanding and perhaps glimpse of who we actually are.

Here is Gampopa’s final instruction to his student Dusum Khyenpa, who became the 1st Karmapa Lama:

‘’Whatever you are doing, be mindful of the stillness of your awareness amidst the movements of Samsara.’

Jackson Peterson, a student of some of the topmost Tibetan and Zen masters of the 20th Century, explains:

‘Awareness is the Unchanging Background Consciousness in which All Phenomena Appear. The foreground is always impermanent and changing, while you as the background Knowingness, never moves or changes.

Leave all thoughts, ideas, experiences, identities, philosophy, religion and metaphysics in the changing foreground, while remaining where you always really are… in the empty background, untouched by all the changes occurring in the foreground.

Let’s say you are sitting in shamatha (mind-calming) meditation, where you are observing thoughts and whatever mental traffic is coming and going, but not getting involved or engaged with what’s appearing in the mind.

This at least produces a little space between being fully identified with mind, and the mental phenomena being identified with. But it is still a totally deluded state of dualism: a separate “me” as the observer of thoughts, and the thoughts observed.

Here is where a “backward step” can be used to transform dualistic shamatha into non-dual vipassana (insight) meditation.

While in shamatha, observing the current display of thoughts, mentally inquire:
“Who or what is aware of the one (the “me”) who seems to be observing the thoughts?”
It’s like taking a step behind the “mental self” you were identified with, to observe it, while it was observing thoughts coming and going.
It’s kind of like recalling a dream in which you were being chased by tigers, and noticing how you weren’t really the one being chased by tigers. The self you felt you were in the dream, was just an imaginary dream self.

Likewise, the one you seem to be, who is observing the thoughts during shamatha meditation, is also just another thought construct, but one who is in the subject position.
This one who is seeming to be your real “me” or self who is observing thoughts and perceptions, is the same one who suffers, fears death, gets angry, sad, anxious, happy or depressed.

Take a cognitive “step” behind that one, and see it is not who you actually are, it’s a part of the foreground.

This is like stepping out of being the samsaric self who stars in its own samsaric dramas. The Buddha called this “Bodhi”, or waking up from the dream of believing you are the actual person felt as “me”, in the dream of life.

Nirvana is just one short step away… the “backward step”, that reveals who you actually are and who you never were. Nirvana is the background Awareness.

You are the ultimate background Awareness which merely watches or experiences the foreground as the energetic display; like a crystal mirror and the reflections appearing in it.

Just be the always present, undefined, impersonal observer in the background, not something which can be observed.’

Dudjom Rinpoche wrote: ‘… nowness is the real buddha… By simply relaxing in this uncontrived, open, and natural state, we obtain the blessing of aimless self-liberation of whatever arises.’ 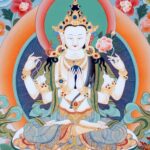 We visualise at our crowns a white lotus & moon seat.
Upon these. From HRIH, arises Arya Avalokiteshvara.
He has a white translucent body that radiates 5 coloured lights.
He has a smiling expression & gazes upon us with eyes of compassion
He has 4 hands, the 1st two pressed together at his heart, & the lower 2 holding a chrystal mala & a white lotus flower.
He is adorned with silks & jewelled ornaments & wears an upper garment of an antelope skin.
His crown is adorned with Amitabha.
He sits with his legs crossed in the Vajra posture, supported from behind by a stainless moon.
He is the synthesis of all objects of refuge.