Welcome to our thirtieth online suggested practise for the week. We are now broadcasting a live teaching each Monday evening. If you would like to participate please contact us using the contact form on the homepage. 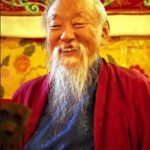 Begin by establishing pure motivation, your aspiration to attain enlightenment in order to help beings go beyond suffering and find permanent bliss and happiness. Then, in as much detail as you can, think about how things change. When your mind becomes weary, relax. Don’t force it; true relaxation doesn’t last very long at first.

When thoughts begin surfacing again, visualize (imagine!) yourself in a very high, rugged terrain where sheer black rock cliffs rise precipitously. You have nothing to cling to. Only one precarious path snakes along the steep sides of the cliff, becoming progressively narrower until it completely disappears. Snarling, ravenous beasts are chasing you, but you’ve got nowhere to run. They close in; there is no safety anywhere. You are helpless, without friends or family, without hope.

In desperation, you call upon your teacher, God, or Buddha—someone or something greater than you, and infallible. That embodiment of perfection appears, saying, “Don’t be afraid. These treacherous black cliffs have arisen as the result of your clinging from beginningless time to a belief in the truth of ordinary reality. This belief has become so strong that great danger appears to surrounds you. Ignorance makes the landscape dark. These beasts that mean to kill you represent ripening karma you’ve created with your own poisonous mind. This narrow path that disappears into nothingness is the way of samsara. Whatever has come together will separate; whatever is happening now will at some point cease. Day by day, each step you take will pass without any possibility of reclamation or control. The shortness of the path indicates the insufficiency of the karma sustaining your life.”

Then the infallible being you have invoked asks, “What is death? What is samsara? It seems good, bad, happy, sad, but it’s like a dream. There is not a trace in it of anything true or solid. Delusion and ignorance perpetuate phantom experiences of danger and terror. To awaken from this dream is to realize the birthless and deathless absolute nature.”

After you have finished the visualization, let your mind rest. Finally, dedicate the merit of your practice to all beings, so that they may awaken from the dream of suffering.
***
Through this meditation, you will see that delusion, ignorance, mental poisons, karma, and belief in the truth of an insubstantial reality all create the precarious conditions of cyclic existence. By recognizing impermanence and contemplating the empty, dreamlike nature of your experience, you will undermine your belief in its solidity.

Meditation on the four thoughts brings maturity to our spiritual path. Without it, we merely have “fair weather practice.” There is a Tibetan saying: as long as our food tastes delicious, our clothing is warm, the sun shines, and everything seems to be going fine, our practice will be reliable. But as soon as something goes wrong, a friend turns on us, we lose something or someone dear, it goes out the window. It doesn’t support us in times of need or provide refuge from pain and fear.

Our practice needs to be stronger—and to work more swiftly—than our obscurations. Otherwise, our anger, desire, and ignorance will only become more deeply ingrained.

Body, speech, and mind and the precious opportunity they offer are no more lasting or real than a bubble, no more permanent or substantial than a dream. We have to seize the moment, before it’s lost and impermanence takes its toll.”

2.1) The Tibetan Book of Living and Dying by Sogyal Rinpoche – Presented by Geoff Warren 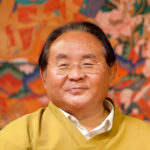 The 2 most famous mantras in Tibet are the mantra of Padmesambhava, called the Vajra Guru Mantra, Om Ah Hum Vajra Guru Padma Hum, & the mantra of Avolokiteshvara, the Buddha of Compassion, Om Mane Padme Hum. Like most mantras they are in Sanskrit, the ancient language of India.

The Mantra of Compassion, Om Mani Padme Hum, is pronounced by Tibetans; Om Mani Peme Hung. It embodies the compassion & blessing of all the buddhas & bodhisattvas, & invokes especially the blessings of Avolokiteshvara, the Buddha of Compassion. Avolokiteshvara is a manifestation of the Buddha in the Sambhogakaya, & his mantra is considered the essence of the Buddha’s compassion for all beings. Just as Padmasambhava is the most important master for the Tibetan people, Avolokiteshvara is their most important Buddha, & the karmic deity of Tibet. There is a famous saying that the Buddha of Compassion became so embedded in the Tibetan consciousness that any child who could Say the word “mother” could also recite the mantra OM MANI PADME HUM.
Countless ages ago, it is said, a thousand princes vowed to become buddhas. One resolved to become the buddha we know as Gautama Siddhartha; Avolokiteshvara , however vowed not to attain enlightenment until all the other thousand princes had themselves become buddhas. In his infinite compassion, he vowed too to liberate all sentient beings from the sufferings of the different realms of samsara. Before the buddhas of the ten directions, he prayed: “May I help all beings, & if I ever tire in this great work, may my body be shattered into a thousand pieces.” First it is said, he descended into the hell realms, ascending gradually through the world of hungry ghosts, up to the realm of the gods. From there he looked down aghast, that though he had saved innumerable beings from hell, countless more were falling in. This plunged him into the profoundest grief; for a moment he almost lost faith in that noble vow he had taken, & his body exploded into a thousand pieces. In his desperation, he called out to all the buddhas for help, who came to his help from all directions of the universe, as one text said, like a blizzard of snowflakes. With their great power the buddhas made him whole again, & from then on Avolokiteshvara had 11 heads & 1000 arms, & on each palm of each hand was an eye, signifying that union of wisdom & skilful means that is the mark of true compassion. In this form he was even more resplendent & empowered than before to help all beings, & his compassion grew even more intense as again & again he repeated his vow before the buddhas: “May I not attain final Buddhahood before all sentient beings attain enlightenment.”

It is said that in his sorrow at the pain of samsara, 2 tears fell from his eyes: through the blessings of the buddhas, they were transformed into the 2 Taras. One is Tara in her green form, who is the active force of compassion, & the other is Tara in her white form, who is compassion’s motherly aspect. The name Tara means “she who liberates”: she who ferries us across the ocean of samsara.
It is written in the Mahayana Sutras that Avolokitershvara gave his mantra to the Buddha himself, & Buddha in turn granted him the special & noble task of helping all beings in the universe toward Buddhahood. At this moment all the gods rained flowers on them, the earth shook, & the air rang with the sound OM MANI PADMI HUM HRIH.

The teachings explain that each of the 6 syllables of the mantra – OM MA NI PAD ME HUM – has a specific & potent effect in bringing about transformation at different levels of our being. The 6 syllables purify completely the 6 poisonous negative emotions, which are the manifestation of ignorance, & which cause us to act negatively with our body, speech & mind, so creating samsara & our suffering in it. Pride, jealousy, desire, ignorance, greed & anger are transformed, through the mantra, into their true nature, the wisdom of the 6 buddha families that became manifest in the enlightened mind.

So when we recite OM MANI PADME HUM, the 6 negative emotions, which are the cause of the 6 realms of samsara, are purified. This is how reciting the 6 syllables prevents rebirth in each of the 6 realms & also dispels the suffering inherent in each realm. At the same time reciting OM MANI PADME HUM completely purifies the aggregates of ego, the skandhas & perfects the 6 kinds of transcendental action of the heart of the enlightened mind, the paramitras of generosity, harmonious conduct, endurance, enthusiasm, concentration & insight. It is also said that OM MANI PADME HUM grants strong protection from all kinds of negative influences & various different forms of illness.

Often HRIH, the “seed syllable” of Avolokiteshvara , is added to the mantra to make OM MANI PADMA HUM HRIH. The essence of the compassion of all the Buddhas, HRIH, is the catalyst that activates the compassion of the buddhas to transform our negative emotions into their wisdom nature.

For those who are familiar with the mantra & have recited it with fervour & faith all their lives, the Tibetan Book of the Dead prays that in the bardo: “When the sound of dharmata roars like a 1000 thunders, may it all become the sound of the 6 syllables.”