Welcome to our thirty ninth online suggested practise for the week. We are now broadcasting a live teaching each Monday evening. If you would like to participate please contact us using the contact form on the homepage.

2.0) Was Jesus a Buddhist? – Presented by Bob Pollak 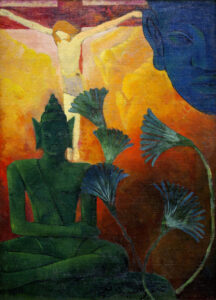 Christmas being the celebration of Jesus’ birth and this being our last meeting before an important Christian festival, here is a brief and light outline of a now fairly well known theory that Jesus’ beliefs may well have been strongly shaped by Buddhism… and even that, as some claim, Jesus was a Buddhist.

Christianity originated in Palestine 500 years after Buddhism
Buddhism was known in Palestine by that time, so Jesus might easily have come into contact with the Buddhist belief system
Certainly, aspects of Jesus’ hence Christian teachings – e.g., ‘Loving thy neighbour’, ‘turning the other cheek’ and ‘the meek shall inherit the earth’ – had no basis in Judaism (Jesus’ native religion)… yet such views are prominent in Buddhist teachings
Some more contentions views include placing significance on the three wise men coming from the East, and that their supposed search for a particularly special, new-born child is not dissimilar to a party searching for a reincarnated teacher (!)
So, might Jesus have been a Buddhist? The answer is not yes or no, but rather to what extent Jesus was or was not a Buddhist. The historic evidence shows that Buddhism had spread throughout the area, from Mesopotamia to Egypt, which included Jerusalem as a trading centre between East and West. Contrary to Rudyard Kipling’s colonialist belief that never the twain shall meet, East and West have shared the same history at least since Aryan populations began settling west and central Asia four thousand years ago, which are the ancestral stock shared by Jews and Hindus alike. East /West wars have been documented since at least the Trojan War 3,200 years ago. Both Alexander and Ashoka brought East and West together in different ways, and the Silk Road was well established during the beginning of China’s Han dynasty at least a century before Christ.

While historic evidence of Jesus being in India is open to speculation, nevertheless Kashmiri tradition speaks of a sage named Isa coming from the West, who spent his youth there as student, and later returned in his thirties to spend the rest of his life teaching and dying there (extremely controversial, since it contradicts the pivotal Christian belief that Jesus died on the cross and afterwards was resurrected).  Certainly, no answers are found to the question of where Jesus was during his lost years. It is proposed that he was no hometown carpenter, and that he may have travelled extensively throughout Asia Minor, which would have increased his exposure to Buddhism. His travel is indicated by the many records found in India and even China and the keen interest demonstrated by Buddhists and other Easterners.

The textual evidence shows that Buddhism not only had spread West through Silk Road travellers and contacts between East and West from the conquests of Alexander, but also had been deliberately propagated through emissaries sent from India during the third century BC. This influence is revealed both by the actions and statements of Jesus and by the Old Testament prophecies about the Messiah, a term probably derived from Sanskrit.

The identities and parallels between the legends of Buddha and Jesus and between their deeds and statements require explanation. They are too close and too specific to be explained by a presumed set of Universalist truths and ethics. If these truths and ethics are so universal and evident, then why is human history dominated by violence and ignorance? Why are the same identities not evident between Jesus and Mohammad, Jesus and Zarathustra, or Jesus and Lao Tzu?

When nineteenth-century missionaries translated and read ancient Sanskrit and Pali documents in India, they began to call Buddhism the Christianity of the East. But Buddhism came first, five hundred years before Christ. The more accurate dubbing is to call Christianity the Buddhism of the West. 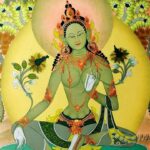 There are two main legends of how Tara came to be:
1. When Chenrezig saw the suffering of sentient beings, he shed two tears. one became Green Tara, the other, White Tara, to overcome any obstacles swiftly.
2. Tara was a princess many years ago who through her commitment to fearlessness and courage to help sentient beings over many lifetimes, only being reborn as a woman, became enlightened. 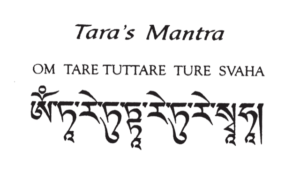 Om: The qualities of the Body, Speech and Mind of all the Buddhas
Tare: Swift One
Tuttare: Protecting from fear
Ture: Fulfilment of our spiritual path
Svaha: So be it

Tara Practice is to commit to becoming Tara, the essence of all the Buddhas and Bodhisattvas, so we can overcome obstacles to enlightenment.

Link to a Youtube video of Green Tara chant.