Welcome to our forty seventh online suggested practise for the week. We are now broadcasting a live teaching each Monday evening. If you would like to participate please contact us using the contact form on the homepage.

Zen in the Art of Archery (Zen in der Kunst des Bogenschießens) is a book by German philosophy professor Eugen Herrigel, published in 1948, about his experiences studying Kyūdō, a form of Japanese archery, when he lived in Japan in the 1920s. It is credited with introducing Zen to Western audiences in the late 1940s and 1950s.
Origin

Herrigel (1884–1955) was a German professor of philosophy, with a special interest in mysticism. From 1924 to 1929 he taught philosophy in Japan, and studied Kyūdō (the art of the Japanese bow) under a master named Awa Kenzô. Awa taught kyūdō in a way that was regarded by some as a mystical religion, called Daishadokyo. Daishadokyo was an approach to kyūdō that placed great emphasis on the spiritual aspect and differed from much of the mainstream practice at the time.[1] In 1936, Herrigel wrote a 20-page essay about his experiences, and then in 1948 expanded the essay into a short book. The book was translated into English in 1953 and Japanese in 1955.

Shooting at a target

The Master said ‘Put the thought of hitting right out of your mind! You can be a Master even if every shot does not hit. The hits on the target are only the outward proof & confirmation of your purposelessness at its highest, of your egolessness, your self-abandonment, or whatever you like to call this state There are different states of mastery & only when you have made the last grade will you be sure of not missing the goal’.
‘’That is just what I cannot get into my head’ I answered. ‘I think I understand what you mean by the real inner goal which ought to be hit. But how it happens that the outer goal, the disc of paper, is hit without the archer’s taking aim & that the hits are only outward confirmations of inner events-that correspondence is beyond me.’
‘You are under an illusion’, said the Master after a while, ‘if you imagine that even a rough understanding of these dark connections would help you.
These are processes which are beyond the reach of understanding. Do not forget that even in nature there are correspondences which cannot be understood & yet are so real that we have grown accustomed to them, just as if they could not be any different.
The Master said that ‘I do not face the goal in such a way that I am bound to see it, even if I do not intentionally turn my gaze in that direction. On the other hand I know that this seeing is not enough, decides nothing, explains nothing, for I see the goal as though I did not see it.’
‘Then you ought to be able to hit it blind-folded’ I jerked out.’
The Master turned on me a glance which made me fear that I had insulted him & then said ‘ Come to see me this evening.’
In the evening the Master told me to put a taper, long & thin as a knitting needle in the sand in front of the target, but not to switch on the light in the target sand. It was so dark that I could not even see its outlines & if the tiny flame of the taper had not been there, I might perhaps have guessed the position of the target, though I could not have made it out with any precision. The Master ‘danced’ the ceremony. His 1st arrow shot out of dazzling brightness into deep night. I knew from the sound that it had hit the target. The 2nd arrow was a hit too. When I switched on the light in the target stand, I discovered to my amazement that the 1st arrow was lodged fully in the middle of the black, while the 2nd arrow had splintered the butt of the 1st & ploughed through the shaft before embedding itself beside it.
The Master surveyed them critically. ‘The 1st shot was no great feat, because after all these years I am so familiar with my target stand that I must know even in pitch darkness where the target is. That may be & I won’t pretend otherwise. But the 2nd arrow which hit the 1st – what do you make of that? I anyway know that it is not I who must be given credit for this shot. ‘It’ shot & ‘It’ made the hit. Let us bow to the goal as before the Buddha!’
Bow, arrow, goal & ego, all melt into one another, so that I can no longer separate them & even the need to separate has gone. For as soon as I take the bow & shoot, everything becomes so clear & straight forward & so ridiculously simple’.
‘Now at last’ the Master broke in, ‘The bow string has cut right through you.’ 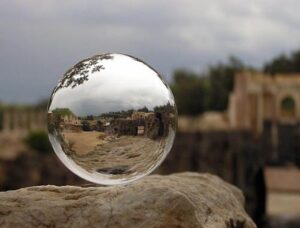 Dzogchen teachers often refer to our unconditioned, undefiled pure awareness (known as rigpa), to be like a mirror:

A Mirror Exercise (by Jackson Peterson):