Welcome to our thirty fifth online suggested practise for the week. We are now broadcasting a live teaching each Monday evening. If you would like to participate please contact us using the contact form on the homepage. 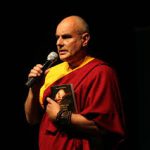 Who are We and What Do We Stand For?

Let’s start with the easy question first. What is a Buddhist? In Tibetan, the word used to refer to a Buddhist is nangpa, which basically means a person who is focused on inner reality’. This refers to someone who spends his or her time looking within for contentment, not outside in the trappings of the material world, nor does he or she seek answers from some other, superior being.

The Buddhist goal is to free oneself from suffering. Here, I’m not really talking about physical suffering, the unavoidable pain we encounter in our lives, but about mental suffering or discontentment. For example, the kind of suffering that stems from trying to get permanent happiness from impermanent things. This is the most important practise for a Buddhist, and is a distinctive feature
of the Buddhist path. A Buddhist is someone who has taken refuge in what Buddhist call The Three Jewels, from the very depths of his or her heart. The Three Jewels are the Buddha, his teachings and the excellent teachers who have made his teaching accessible.

Once we go to the Buddha, we should be very careful not to follow any misleading guides or teachers. Having taken refuge in the teachings, we should do no harm to other beings, no matter what their size, and this obviously includes refraining from eating meat. We should cultivate compassion, which is the wish to ensure that all beings are free from discontentment. And having taken refuge in the spiritual community, we should not join any organisations that brings harm to ourselves or to others.

Morals and ethics are also important to the Buddhist, but the primary concernshould be the understanding of the Buddha’s core teachings. I believe that if you fully understand these teachings, which are the essence of all of the Buddha’s teachings, your behaviour and ethics will automatically improve, because you will know the root of discontentment and how to eliminate this root. This will then lead you to have greater compassion for all beings who do not understand the cause of their discontentment and suffer in ignorance.

A Buddhist seeks to improve his or her actions of mind, body and speech. The main feature here is the mind, because if you can truly get in touch with the mind, your body and speech will naturally follow. However, this is no easy task as we are controlled by our thoughts. The trick is to take control of the thoughts  and not let them control us, which can be achieved by understanding the nature of our thoughts and the mind, through study and contemplation.

In the next two verses from Dharmmapada ( a collection of Gautama Buddha’s sayings), the Buddha illustrates the effect of a negative and a positive mind.

Verse one
Mind precedes all mental states.
Mind is their chief.
They are all mind-wrought.
If with an impure mind
A person speaks or acts,
Suffering follows him like the wheel
That follows the foot of the ox.

Verse Two
Mind precedes all mental states.
Mind is their chief.
They are all mind wrought.
If with a pure mind

A person speaks and acts,
Happiness follows him
Like his never-departing shadow.

So, to summarise, a Buddhist is someone who takes refuge in the Buddha, his teachings and Buddhist teachers. This involves looking within to try and alleviate and eventually stop mental suffering. After advancing on this path, he or she is in a better position to help others do the same. He does not look to a Supreme Being or creator god who can do this for him.

The next two questions, what does a Buddhist believe and what did the Buddha teach, go together, as a Buddhist believes in the teachings of the Buddha. I will also in this section, pass on some advice the Buddha gave on the best way to approach Buddhist teachings. Gautama Buddha’s instructions can be condensed into the following four lines:

We should help other as much as possible.
Where we cannot help them, we should at least not bring them harm.
Finally, we should purify our minds.
This is the teaching of the Buddha.

The Buddha said that a good way not to harm others (and ourselves) is to refrain from lying, killing, stealing, drinking intoxicants and engaging in sexual misconduct. This way, our minds can be free of torment and guilt. We all know that if we tell a lie, it makes our mind uneasy. If we intentionally kill someone or something, we feel a sense of guilt. Even if we steal, we feel guilty and reluctant to go back to where we have stolen the item from. When we cloud our minds with alcohol or drugs, we do or say things we inevitably
regret later and once we have performed any form of sexual misconduct, such as having sex with a married person or someone underage, our mind is completely torn apart by guilt and remorse.

So, it is clear that if we refrain from such actions our minds will be at ease, and if they are at ease then the people we come into contact with will also be aease with us. A clear mind is a peaceful mind. This is not religion but common sense. This teaching represents the ethical side of Buddhism. Buddhism is sometimes likened to a bird with two wings – one wing represents the ethical or
compassionate side, the other wing, the wisdom teachings. Without both wings the bird cannot fly. The wisdom wing of the Buddha’s teachings can be condensed into the following four points:
1 All compounded (assembled) things are impermanent
2 The consequences of emotions are suffering
3 All thing have no inherent existence
4 They final goal is beyond our understanding

These are what we call the Four Seals in Buddhism. This book discusses these Four Seals, packing all of the Buddha’s 84,000 discourses into four manageable points.

All schools of Buddhism, which are based on the Buddha’s teachings, accept the Four Seals as the distinction between Buddhism and ‘non-Buddhism’. Any sutra that contradicts, wholly or in any part, any of the Four Seals, is not true Buddhism.
In order to consider yourself a Buddhist, you should understand and accept the Four Seals. The seals are meant to be taken literally, not metaphorically, so it is important that the Buddhist understands and implements all four of the seals, not just during meditation practice but at all times.

In one of his sutras, the Bhaddekaratta Sutra, The Buddha advised us about the best way to approach his teachings. The sutra is called ‘Knowing the better way to catch a Snake’, and the Buddha cautioned us as follows: ‘you must bring your whole heart, mind and being into listening to the Buddhists teachings, otherwise you may understand them incorrectly, and it will bring more harm than good to you and others. He further stated that if a wise person was trying to catch a poisonous snake in the wild, he would pin its head down with a forked stick first. That way, the snake could not bite him. The Buddha further stated in this sutra: If you do not practise the Buddha’s teachings correctly, you may come to understand it is opposite to what was intended. But if you practise intelligently, you will understand both the letter and the spirit of the teachings and will be able to explain the correctly. Practise to attain liberation, and if you do, you will have little pain or exhaustion. The snake allegory in this sutra is used to convey how dangerous studying Buddhism in an incorrect way is. So the best way to catch a snake is by pinning it’s head down, and they best way to learn Buddhism is to pin it’s head down,
is by studying the Buddhist foundation teachings, listening to them carefully and putting them into practise.

There are many so-called higher practises of Buddhism that seem very exotic, for example, Tantra, with it’s colourful deities and practises. The sounds of the drum and the bell, the smell of the incense, and the complicated chants, all give these teachings a mystical feel. For many years, these higher practises remained a secret, and there was good reason for that, but now that they are out there we must proceed with great caution. If you do not first build your Buddhist foundation, your Buddhist house will most definitely tumble down.
So, how do you build your Buddhist foundation? By studying the Four Noble Truths, The Eightfold Path, the Twelve Links of Interdependence and, of course, the Four Seals. When I say study, I do not mean learn these teachings intellectually, but you should acquire further knowledge on them, contemplate them, ask questions if you have any doubts and then finally meditate on them
until they become part of your very being. It is even better if you can find an authentic Buddhist teacher, who will help you travel along the path.

2.1)  – The Motivation of The Four Thoughts That Turn The Mind to Dharma (The Four Ordinary Foundations) – Presented by Steve Reynolds 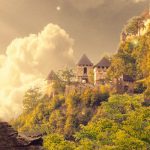 ‘These are the “four thoughts that turn the mind to religion”. We are urged to meditate on them-to think about what they mean and how they affect our lives. This contemplative practice is called the “Four Ordinary Foundations”. It is presumed that once we have thoroughly internalised these thoughts, our interest will shift away from short-term worldly concerns and toward long-term religious ones, providing us with a basis for an ever-deepening involvement in religious practice.’ The Torch of Certainty p29 Jamgon Kongtrul

1. Now I have this unique opportunity, a free and well favoured human form, so difficult to find.
What makes this life Unique/so difficult to find?
There are lots of humans, 7.8 billion of us but there are many animals, 10X as many are slaughtered for food each year, plus all the birds, fish reptiles and insects.
We have the Dharma and the ability to understand and practice it.
It’s also called a ‘Precious Human Life’ for these reasons.
Do we value it in this way?

2. But it will not last forever; death can come at any moment
Impermanence, death is only one breath away but we rarely consider our own death.
If we knew when we were going to die, where would our focus be?
Waking up in the morning is a good time to be grateful and committed.
Today I’m fortunate to have woken up, I am alive,
I have a precious human life, I will not waste it. . . HH Dalai Lama

3. And wherever I am born in Samsara, there will be suffering
For as long as your mind imprisons itself in cyclic existence, death will follow birth and birth will follow death.
There will be no end to this uncontrolable cycle if you don’t work towards your liberation. So live and die without regret by making full use of your precious human life while you have the the chance, or you might look back and wish that you had started practice today. Chamtrul Rinpoche

The more we consider what Samsara is, the more likely we will want out of it.
Suffering! What do you expect, its Samsara.

4. For both virtuous and harmful actions, karma’s cause and effect cannot be escaped
If every action has a reaction, what will you do?
Store up the merit of good Karma for yourself?
Liberation comes from the exhaustion of Karma.