Welcome to our nineteenth online suggested practise for the week. We are now broadcasting a live teaching each Monday evening. If you would like to participate please contact us using the contact form on the homepage.

2.0) Vaijrayogni & Dakinis their place in Tibetan Buddhism and use by Buddhist Lamas – Presented by Helen Puk 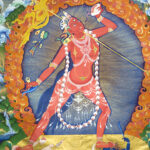 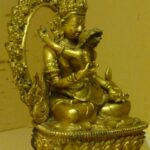 In Tibetan Buddhism there are yogini’s the female version of a yogi.

These are the female practitioners that have attained emptiness or space Vaijrayoginī’s essence is “great passion” (maharaga), a transcendent passion that is free of selfishness and illusion — she intensely works for the well-being of others and for the destruction of ego clinging. She is very passionate but it is using the passion to attain spiritual enlightenment. Passion or spirit as in the spirit of a horse or spirited is a very powerful energy if used properly and controlled not to go in to anger. Vaijrayogini is born from Bliss so her body is deathless. She is about attaining enlightenment so escaping the Bardo and rebirth. We need a pure mindand body to attain Vajrayonin. It is said there are forms of vaijrayogin everywhere but our mind cannot see it as it is not pure. She has been said to appear to a Monk as a woman with leprosy or a wine seller but they could not see it until their mind was pure. She then took them to the Pureland.
The Tibetan practice is very secret but it is said she follows you every lifetime if you have practiced her and she will help you at the time of death. This is said to be the quickest practice to enlightenment.

Vaijrayoginī is visualized as the translucent, deep red form of a 16-year-old female with the third eye of wisdom set vertically on her forehead and unbound flowing hair. Vajrayoginī is generally depicted with the traditional accoutrements of a dakini, including a kartika (a vajra-handled flaying knife) in her right hand and a kapala filled with blood in her left hand that she drinks from with upturned mouth. Her consort Cakrasaṃvara is often symbolically depicted as a khaṭvāṅga on Vaijrayoginī’s left shoulder, when she is in “solitary hero” form. Vaijrayoginī’s khaṭvāṅga is marked with a vajra and from it hangs a damaru drum, a bell, and a triple banner. Her extended right leg treads on the chest of red Kālarātri, while her bent left leg treads on the forehead of black Bhairava, bending his head backward and pressing it into his back at the level of his heart. Her head is adorned with a crown of five human skulls and she wears a necklace of fifty human skulls. She is depicted as standing in the center of a blazing fire of exalted wisdom. Her countenance shows both erotic and fierce features, “in the fullness of bliss, laughing and baring her fangs.”

Yogini’s can be ones that have lived previously like Tara, Saraswati, Mother Mary, Mary Magdaleine or they can be alive today like Pema Chodren Pema or Tenzin Palmo. These females contain great wisdom the art of compassion is to have wisdom. Compassion is only useful if we use it with wisdom. Sometimes helping someone is not giving them what they want but giving them help. This is the case with alcoholics. Is it compassionate to give them money for alcohol. Therefore you ust learn to discern wisdom of compassion or you can do more harm. Therefore the great sky dancers become great warriors. They are strong powerful women.

To become a warrior you need to be able to control the energy of the body and the emotions. This is developed by awareness of your energy, feeling your energy and then being able to control the energy. This is done by special yoga martial arts and meditation .This takes 15-40 of years of consistant training. This is not an easy path and once on the path you cannot get off. It is a commitment and if you try to get off you will become sick. With the development of the skills learned you start to develop supernatural powers. This is done by an awareness of vibrational frequencies of the body and the energy lines of the organs. The intent and concentration is developed to give you the ability to move the energy. This is why we are taught to keep bringing the mind back to a single point.With this you can heal as in acupuncture shiatsu ayruvedic and Tibetan medicine .Also you can become aware of the thoughts of others, move the mind outside the body and just as energy can be used for good it can also be used in a martial arts way for protection.

The Dakinis are used by the yogi’s to attain enlightenment. Full enlightenment cannot be attained without a yogini. This is about combining the left and right side of the brain For full enlightenment the energy has to reach the top chackra. This is represented by YabYum. A skilled yogini can control the energy to draw it up the spine. This can be done during isexual ntercourse It can also be done by imagining you are the male and the female.

2.1) Prajnaparamitra the Perfection of Wisdom Sutra, the Mantra that dispels Obstacles. – Session 6 of 6 Presented by Geoff Warren. 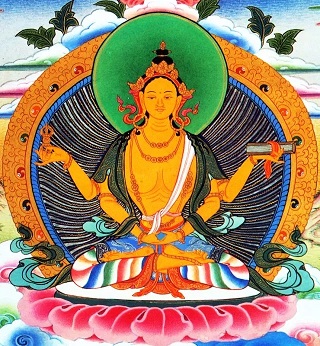 This Sutra, the 2nd turning of the wheel of Dharma was taught by the Buddha at Mass Vultures Peak in Rajagriha. It was transmitted orally & only written down a 100 years or so after the Buddhas death.
The Prajnaparamitra is a method to overcome hindrances both internal & external.
The 4 types of interferences are :
1). The mara of the delusions
2).  The mara of the aggregates
3).  The mara of the Lord of Death
4).  The Devaputra mara
When we overcome these hindrances we become a Conqueror or Foe Destroyer, when we overcome subtle delusions we become a Buddha. The method to overcome these hindrances is the practise of the Perfection of Wisdom & the recitation of the Mantra.

The literal English translation is “Go, Go, Perfectly Go, Perfectly & Completely Go to the five paths to Enlightenment.
By reciting this mantra with deep faith in it’s power we can remove obstacles for ourselves & others & achieve enlightenment for the sake of all beings, so may it be.